My Christmas present this year was a telescope, and after successfully using it on the first couple of clear evenings to observe Earth's moon, Jupiter and its four biggest moons, I wanted to try and take some photos - without spending hundreds of pounds if I could help it. From some reading online, connecting a web camera seemed to be the best plan.

From internet background reading it seemed a CCD (charged coupled device) sensor webcam would be ideal, however these days most web cameras use a CMOS sensor instead which is far less sensitive in low light where every photon counts.

You can still find a few CCD webcams highly rated for astrophotography on eBay and so on, often pre-modified for telescope use, but their rarity is pushing up the prices - and I wanted to try something inexpensive to begin with.

The Microsoft Xbox Live Vision web camera intended for the Xbox 360 has been reported to give reasonable astrophotography images. This webcam is widely available from as little as £5 delivered - I got mine from eBay. The USB cable was surprisingly long at 2.75m (or 9 foot for any Americans reading), which should be helpful for sitting near the telescope with a laptop.

My camera from eBay didn't come with any box or manual, but to check the exact ID of a USB device you can use the lsusb command on Linux, or on a Mac system_profiler SPUSBDataType. Product names are somewhat fuzzy, but the USB IDs 0x045e 0x294 identify this unambiguously on the macam webcam list as the "XBox Live Vision (XBox 360)" which matches the label on the camera's base, and this works "out of the box" on Mac OS X 10.7.2 "Lion" which was a good start.

One major tasks ahead of me is working out the best software to capture and process images from the webcam under Mac OS X "Lion" - sadly several of the older tools I looked at like AstroImager were PowerPC only, and all Mac computers nowadays use Intel CPUs instead and Apple has dropped their Rosetta compatibility library.

Based on the description and photos from Cliff Tate on the Star Gazers Lounge forum, I was able to open the web camera - although it wasn't very easy and there are now plenty of screw driver teeth marks all the way round, and the two catches on the bottom edge got damaged.

I found the top (three catches) and sides (one catch each) much easier to open - you can see the seven catches in the photo below where the open webcam is live showing the four green LEDs very clearly if you run the camera open.


One reason I opened the camera was to disable the LEDs in order prevent any stray light which might affect image capture, and any possible heat release. Here is a close up photo after I removed the four LEDs using my smallest jeweller's screwdriver by placing the flat tip along the long edge of edge LED and twisting gently to prise off the LED. I was relieved to find this doesn't seem to stop the camera working at all.

The black lens assembly just unscrews - although this isn't possible with the white front piece in place. The fitting appears to use a 12mm thread, with 0.5mm teeth which I'm guessing makes it the standard M12 x 0.5mm thread used on many webcams (update - it does, see below). This should provide the best way to attach a telescope adaptor and ensure the sensor is centred and perpendicular, although the outer casing will need cutting or replacing. Sadly the white nose cone part of the casing doesn't seem to separate easily from the clear plastic ring which shows the green LED light - so I just cut it off with a junior hacksaw, and sanded down the edges. I can now unscrew and remove the black lens fitting without obstruction, and am reasonably confident a standard telescope adapter nosepiece could be screwed in its place. Note with the nose cone removed, you must be careful not to over tighten the thread.

However, not yet owning a proper webcam nosepiece adapter, and wanting to test the webcam out with my telescope ASAP, I improvised with the closest thing I could find to a 1.25" diameter tube - which turned out to be a plastic tube of effervescent vitamin C. The tube is actually a few mm too narrow, but the thumbscrews on the telescope seem to tighten enough to hold it reasonably steady. Again, out with the junior hacksaw and file, plus some Sellotape and here is my jerry rigged adaptor ready for action: 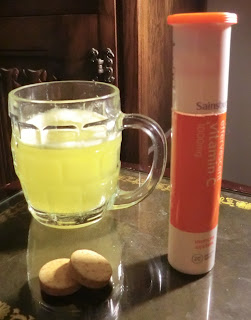 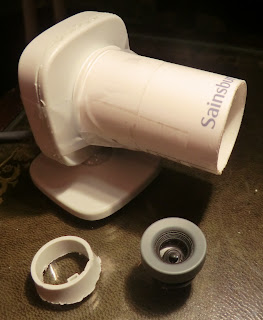 Luckily there was a full moon out tonight, even though it was a bit cloudy, which gave an easy target for the first test run:


That was a success I'd say - although it does seem I have got at least one bit of dust somewhere which is a shame, and there is also something of a purple tinge to the left hand edge of the image (actually the right edge, Photo Booth flips things) (update - this purple fringe is probably something called 'amp glow'), but still not bad for a first attempt. If anyone is curious, this was taken though the window pane - it was too windy outside to keep things stable.

I'm waiting until I have a proper mounting system before I remove the red glass IR filter (you must unscrew the PCB in order to unscrew the black sensor cover - update - I've done this now), since if leave the glass in place for now it can protect the CCD from dust. I plan to order a pre-made adaptor to attach via the screw thread on the webcam, probably with an 1.25" infra-red filter. Hopefully a rigid mounting like this will reduce the wobble in the image during focus, since the tape had some wiggle in it. Another potential hardware project is adding some form of cooling to avoid hot pixels.

I also need to explore my software options, and learn about tracking for multiple exposures and video - right now the moon moves out of frame at a very visible rate, requiring frequent aim adjustment.

But for now, I have something that seems usable, and only cost me £5 in materials and some experimentation over an evening - which was fun in itself.

A standard webcam nosepiece does screw on nicely (once the white plastic cone is cut off) in place of the provided lens (update - The exact model I bought is the 1.25" Astro Engineering AC378 adapter).
Now I need a free evening with clear skies for the moon or planets to see if the screw on adapter makes a noticeable difference

I have now removed the red glass filter - and it makes the camera much more light sensitive! The proper adapter is also much more robust and a worthwhile investment.
Posted by Peter Cock at 21:38