After trying the single speed simple economy EQ2 motor with my SkyWatcher telescope, I decided to upgrade to the multi-speed version which I think is much nicer to use and definitely worth the extra money.

In my last blog post I documented how I got on with the widely available economy EQ2 motor, which costs about £30. I initially opted for this cheaper option since I thought it would supplement the manual fine RA control, not replace it. On reflection, I decided to upgrade to the £60 multi-speed EQ2 motor.

I was under the impression this was an official SkyWatcher accessory, (updated) but the packaging and instructions are not clearly branded this way (this is apparently normal for all SkyWatcher accessories). Again you get a single page of instructions, although this time only one illustration was printed mirrored. However, in the operation instructions where it describes the button functions there are funny symbols printed for the rotation speeds, and the button captions don't match the control box.
The other negative thing that struck me on first inspection (apart from the instructions), was the quality of the battery holder and it's black case. It works, but it feels rather cheap.


In addition to being multi-speed, an additional improvement over the simple motor is this one is mounted with a clutch system, allowing manual fine RA control as well. That's what the spring attached to the motor is for, and the previously useless disk-like cam by the big cog gear wheel on the EQ2 mount itself.

It is a bit more complicated than for the simple economy EQ2 motor, but the basic attachment process is still quite straightforward. 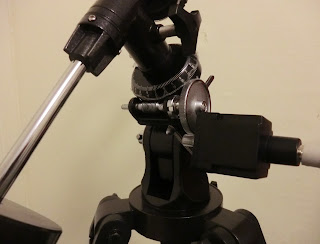 
This seems very easy. When turned on, the LED flashes red, then goes steady green (assuming your batteries are fresh), and begins turning to counteract the Earth's rotation. While you press and hold any of the four main buttons, the LED changes from green to red, and the motor speed changes.

The top push buttons for "reverse" and "forwards" are labelled as 4X, which presumably means 60 degrees per hour. They act as fast controls for moving the RA axis.

There is also a North/South toggle switch (next to the on/off power switch), which flips all the rotations so that the motor can be used south of the equator.

The instructions claim the motor is pre-calibrated at the factory, but there is a variable resistor inside the EQ2 motor control box for fine adjustments.


This multi-speed motor connects to the large toothed cog wheel on the RA axis via a spring and cam based clutch. This means you can move the metal clutch via its lever to disengage the motor, and then use the manual RA fine control (via the control rod if attached). The cam's design means it locks in both the engaged and disengaged positions - very neat.
I found at high magnification using the clutch like this caused a lot of image wobble - possibly partly due to the lightness of the tripod. Instead gently pushing the motor aside to disengage it seemed to work better - although doing it with one hand is a challenge.

Gently applying pressure with a finger (to assist the spring) stopped this. Based on online discussions like this Sky at Night forum thread (which has some very clear photos and advice) I focused my attention on the T-bar which holds the motor.

Simply tightening the T-bar with the motor in the engaged position solves the jumping problem, but isn't perfect. I can still disengage the motor using the clutch, but when the T-bar is tight, the spring isn't strong enough to pull the motor back when the clutch is released. So a little manual intervention is required.  Hmm, probably some fine tuning required - the simple EQ2 motor was more straightforward in this regard.

Getting the spring tension just right seems a bit fiddly (the downside of the clutch arrangement to allow manual fine RA control). However, as I'd hoped, the fact the motor is multi-speed makes fine RA control at high magnification much more practical than with the economy single-speed motor.
Posted by Peter Cock at 03:20