A Japanese-style kotatsu made in Scotland

Traditional Japanese wooden houses don't have central heating - instead some rooms have air conditioning (イアコン), the toilet seat is usually heated, while the living room often has a kotatsu heated table (炬燵, こたつ). Modern kotatsu heaters are compact electrical units mounted on the underside of a low table, which is then covered with a quilt hanging down to the floor to trap the heat. Family life in winter is centred on the kotatsu, for watching TV, eating dinner, etc - with everyone sat round the table with their legs and lower body nicely warm.

A kotatsu heater is probably my best souvenir purchase from Japan to date. The heaters are small enough to bring back in a suitcase (unlike a complete kotatsu table unit), maybe even in hand luggage? To create a kotatsu here in Scotland I've attached the heater to an Ikea LACK coffee table, and added a large duvet and voltage transformer: 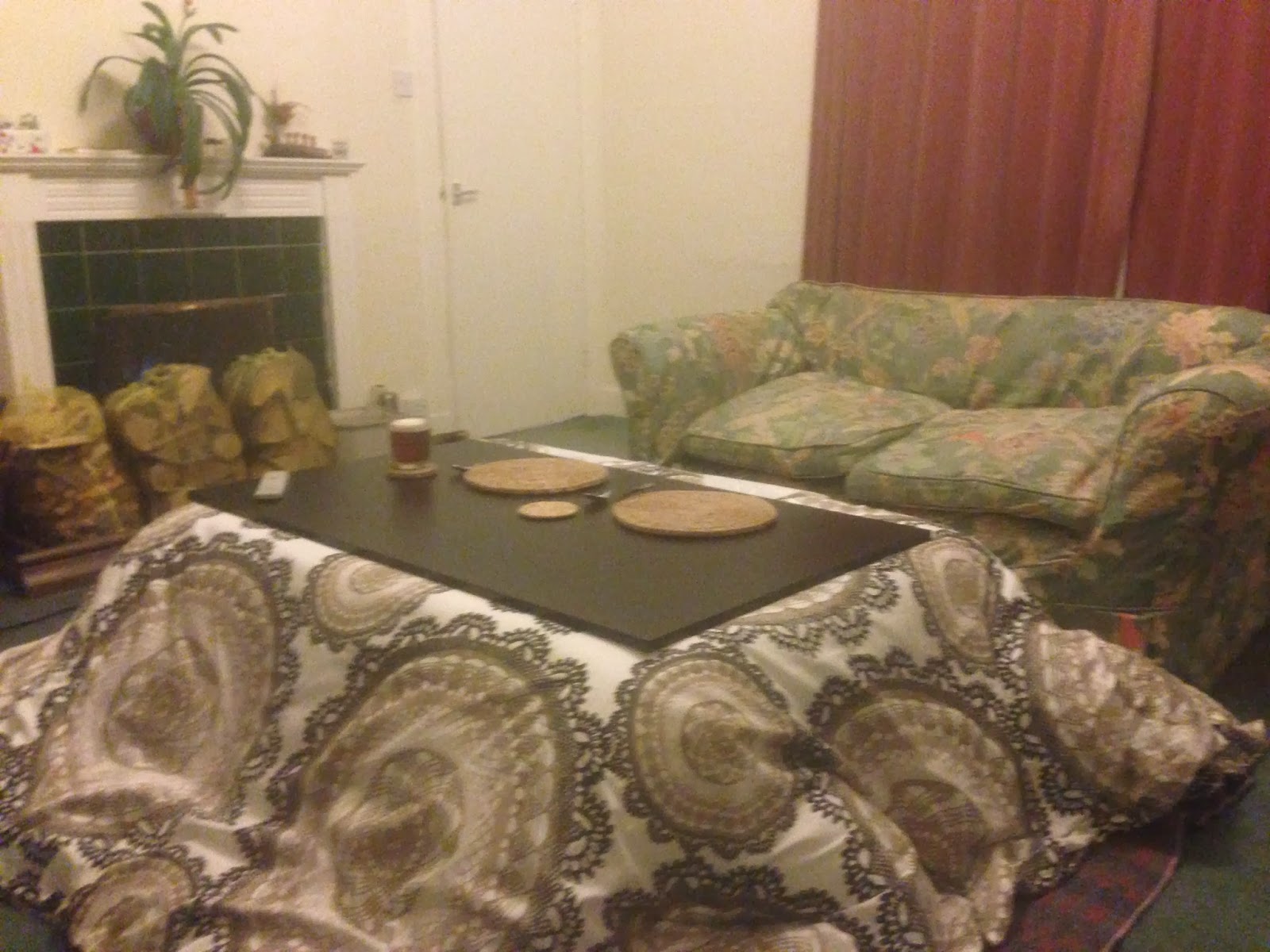 The kotatsu is a welcome addition to the traditional stone-built Scottish cottage where we live, which is hard to get warm in winter - despite retro-fitted central heating with radiators. If this winter gets really cold, we'll move the kotatsu in front of the open fire place...

Nowadays kotatsu heaters are electric units, usually mounted under the table surface within a frame which is covered by the quilt which the table top rests on top of. The main manufacturer selling replacement heaters seems to be Metro Denki Kougyou (メトロ電気工業, or Metro Electrical Manufacturers) whose products also seem to be available as OEM rebadged versions like Yamazen (山善). Metro have a nice English page about their heating elements and their kotatsu heaters.

The current Metro kotatsu heater range are 600W units: MSU-600E(K) with a quartz heater, MHU-600E(K) with a halogen heater, and the MQU-600E(K) with a red quartz heater. These all have U-shaped heating elements with a fan, and have temperature control on the cable itself which is very convenient and an improvement on the older 400W and 500W models like the MS-400HS(K) and MSF-500H(K), where this was on the heater itself - hard to reach under the table.

There are also variants of the current 600W Metro/Yamazen units with more advanced controllers featuring a timer, but I didn't see any of these in stock at the shops I visited.

I bought the MQU-600E(K) with a red quartz heater while in Japan, and brought it back in my suitcase. The unit is designed to fit in a 29x29cm frame, and comes with spacer bars for a larger 31cm frame, and four thumb screws to attach it. According to the label on the back, it was made in Malaysia.
I was a little worried that there was a defect on the red quartz heating coil - there is a quite visible 'wart' about 2mm in size on the right hand side of the U-shaped coil, especially noticeable once glowing, but apparently this is just a manufacturing artefact.

Note the Metro kotatsu heaters expect the Japanese standard of 100V. Most of the links below are to people running them in USA or Canada (120V) without a transformer, but the heaters probably require a step-down transformer to run in the UK with 230 to 240V. Better safe than sorry.

Chronicles of a Sleepy Rabite's kotatsu used two Ikea Hemnes tables, 90cm by 90 cm, legs cut down from table being 45cm high to 40cm high. I liked how they made an actual frame for holding the heater - and wondered if this would be possible using the shelf parts from a single Hemnes table instead?

As a final example, Count-Down-Zero built his own kotatsu table from scratch!

Although you can get round kotatsu tables, browsing in-store and online most are 40cm high and either square (75x75cm to 80x80cm) or rectangular (75x105cm to 80x120cm). Ready made kotatsu quilt/futon sets assume this (up to 190x190cm for the square tables, 190x240cm for the rectangular tables), although international postage costs makes buying them online unattractive (and slow).

Based on these sizes, the Ikea Lacks square 78x78cm coffee tables should work well with a standard double bed duvet (200x200cm), even if kept at 45cm high. Going for this smaller square table would therefore have made things quite a lot cheaper as we could have reused existing bed linen.

Instead we opted for the larger Ikea Lacks rectangular 78x118cm coffee table, and therefore needed something bigger for the quilt. Sadly even a UK King sized duvet isn't big enough. However, at 220x240cm the European King sized duvet works - and conveniently Ikea sell these and duvet covers too. I found with the table at its original 45cm height the duvet was only just long enough to touch the ground along the short edges. In addition, I found the table uncomfortably high, so cut the legs by 6cm bringing the effective table height in line with the expected Japanese norm - and ensuring the duvet fits much better.

As in the Ikea Lack examples above, rather than having a removable tabletop above a frame holding the heater, this approach mounts the heater directly to the original thick (5cm) table top - and uses what would normally be the coffee table's shelf as a thin (1cm) second table top above the quilt. This works, but to make it more stable a heavier tabletop could be used - or a thinner quilt?

Following the other blogged examples linked to above, I looked for suitable right angle brackets in our local DIY stores. For a flush mounting I wanted a hole about 12mm up, and managed to find a set of 4cm zinc corner brackets which worked perfectly - any larger and they would have stuck out above the heater.

Without the shelf in place to prevent this, the Ikea Lacks table legs are prone to rotate. To prevent this I reused the little right angle brackets Ikea include to attach the shelf to instead lock the table legs in place (see photo below).
Note if you do cut the Ikea Lacks table legs, on mine the lower parts are actually hollow with only a thin capping piece inside (see photo above). Perhaps it would have been better to cut off the top, and re-drill the screw hole... hard to say. By cutting the table legs from 40cm to 34cm, this made the final table height 39cm, or including the former-shelf table top about 40cm (plus the quilt), matching most ready made tables on sale in Japan. This also ensured the Euro King duvet touched the ground easily on all sides.

The weather so far this January has been quite mild, but we should be ready when it gets colder :)


One year later the kotatsu is still going strong, and I've improvised some Ikea ZAISU to go with it.


Two years on, we moved house. We don't yet have a sofa and we're still using the kotatsu and zaisu. The new place has a wooden floor with under-floor heating. We're using the same rug with a couple of blankets underneath making it comfortable to sit on, but have added a few cushions too. The heater is still plugged in, but is now only used occasionally rather than daily in winter.

Since moving out of the charming traditional stone cottage to more modern well insulated accommodation, we only used the kotatsu heater a few times. In fact, last winter we never plugged in the heater at all. The low table with duvet has found another role - it is padded and a nice height for a crawling baby to practice standing.


I noticed recently that the big online store Ali Express has started selling various kotatsu things (whole tables, heaters, quilts), and they even have chair and table leg protectors - the 50mmx50mm square table leg protectors from this listing worked perfectly on my sawn-off Ikea LACKS table legs.
Posted by Peter Cock at 13:20